The Art of the Sweat Science

Great to be back in communicado with you all. I know, I know — it has been awhile since the last broadcast, but I have been pretty busy growing a mullet. It takes extreme focus, dedication, and concentration to do something so outlandishly awesome, so I haven’t really been able to divert my creative energies elsewhere.

Actually that’s not why I have been silent these last few weeks (I am growing a mullet, though. The beautiful thing about growing a mullet is if you wear a hat, most people can’t tell.)

Things have been incredibly busy on the PEX-front. We had our busiest month ever in March (yay!) and have been averaging 6 new walk-ins/email inquiries per week since then. In other words, it’s not just the weather that’s been heating up around here.

We are also in the beginning stages of lease negotiations at a new PEX location. So that is also super exciting (and time consuming). In fact, I forgot how time consuming it can be to negotiate a lease, drum up floor plans, generate layout designs, put together equipment lists, hire a general contractor, renovate a space into a personal training studio, engage in the zoning and permitting process, etc.

But it’s all good. Nothing makes me happier than the prospect of flexing our PEX all over Massachusetts.

Did I get you fired up yet? No? Well, check out Alex Badlissi’s Blog on “The Art of the Sweet Science,” then. It’s sure to get you fired up, and it’s a great 1-2 combo with your morning coffee!

The Art of the Sweet Science

By Alex Badlissi, Owner of Forged Boxing and Fitness 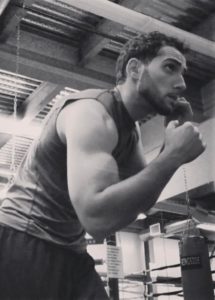 In my opinion, one of the greatest aspects of the fitness community is just that…community. Not often do you find a group of people all striving towards the same general goal who support one another.

Numerous studies and polls have found a direct correlation between happiness and a sense of community. For myself, that sense of community was found in an old run-down warehouse where people punch each other for fun. I fell in love with boxing at an early age, but it was not until I matured and found my passion as a trainer, that I realized all that boxing has to offer.
Often people will tell me they are interested in boxing but don’t want to get hit. I sometimes will joke and tell them that the first day of training requires bare knuckle sparring at full contact. It only isn’t funny when they think I’m actually being serious.

In reality, you can gain many of the benefits without taking any blows. I emphasize with all my clients the importance of boxing with proper technique. Besides the obvious decreased risk of injury, boxing with proper form will also allow you to get a full body workout and recruit more muscles.

People who are new to boxing are more likely to use the swinging motion of their arms to generate force in a punch. However, if you watch a professional fight, you will notice that the boxers are generating power from the ground up. Just like a whip, a boxer uses the kinetic chain to develop torque and force. Much of this power is utilized through trunk and hip rotation. The internal and external obliques help increase and decrease this force.

Another primary muscle used in engaging proper form when boxing, is the Serratus Anterior. Often called the “boxer’s muscle”, the SA helps with scapular protraction. The SA allows the punch to reach further forward by pulling the scapula around the ribcage.

A good boxing program should consist of a variety of different punches. Different punches put emphasis on certain muscles. For instance, when throwing a hook, the bicep is used to help stabilize and retract your arm quickly after it has been thrown. When throwing the jab and cross, the triceps are engaged when the punch is extended. Throughout a boxing workout, the deltoids are engaged simply by holding your arms in a defensive position and from throwing hundreds of different combinations.

When a punch is thrown the front and middle deltoids are used, when you retract the punch the rear deltoids take over. This is why you might notice that most boxers, or people who have boxed for some time, have very developed shoulders.

There are many well-known benefits of boxing for fitness. Some of these include increases in cardiovascular health, hand-eye coordination, reflexes, anaerobic capacity, as well as increase in bone mineral density. Recently, boxing has been shown to help people suffering with Parkinson’s disease. It has been shown to help with balance, coordination, as well as posture, which can help ease some of the symptoms associated with the disease.

Besides the physical benefits boxing offers, it can help tremendously with stress relief and anger management. I have had the majority of my clients tell me they leave the gym feeling a sense of calmness after hitting the mitts or heavy bag for thirty minutes or an hour. Maybe they just like swinging at me.

Either way, boxing has profoundly increased the quality of my life, and I look forward to helping all my PEX clients see the benefits of the Sweet Science.

Interested in taking a shot at a boxing workout with Alex in the near future? Check out this quick and informative video on the six basic punches in the sport of boxing!

Want to learn more about the health benefits of boxing? Then check out this podcast with former professional boxer Tony Jeffries. Jeffries is an English former pro boxer who won a bronze metal in the 2008 Summer Olympics.

As I am sure you’ve all noticed, there’s been some construction going on at the new bank next door. (Thank God for another bank, by the way — I was beginning to worry that the human to bank ratio in Needham was swaying too far away from 1:1.)

I know the parking has been tough, as the workers over there have been taking up a lot of our street parking spaces. Fear not! — I have talked to people at Town Hall and the Needham Police Department about our predicament, and it appears as though the parking has opened up a little bit. Stay tuned.

Additionally, the construction itself has generated a lot of dust and dirt. Please be conscientious about wiping your sneaks off when you come into the gym so we can keep the floors clean! We have re-opened the Warm-Up area at the front of the gym, and are trying especially to keep that part clean, considering that’s where people are rolling around and stretching. Muchas gracias.

2) On the Topics of Cleanliness

We are super excited about these prospects, and will be working extremely hard to get this deal done, and the gym up and open, by the end of summer! Stay tuned.

PEX SALUTATIONS
In Conclusion
That’s all for today’s broadcast. I hope you enjoyed the ride and were able to manage the rollercoaster of emotions you must have felt while reading. Speaking of rollercoasters, always remember this sage advice:
“Life’s a rollercoaster with lots of ups and downs. Don’t forget to throw your hands up sometimes, let out a good scream, and have a little fun.”

Schedule a meet and greet, and facility tour, with the trainer of your choice.